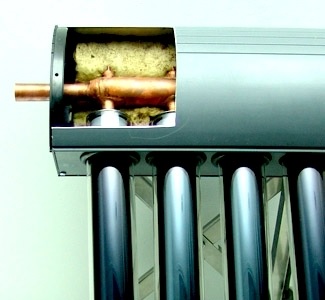 Last post we talked about 5 things to consider when choosing a solar heating system. Today we delve deeper into one of those considerations: flat plate collector vs evacuated tube collector.

Note: Simple Solar does not manufacture collectors and has no vested interest in any collector supplier. By selecting collectors that offer the optimum mix of thermal performance, quality and cost, we have determined that evacuated tube collectors are superior to flat plate collectors for solar heating in northern climes, however we also offer flat plates for those who prefer that option. Below is a summary of our findings.

2. A solar system that is tilted upwards to catch the winter sun will improve winter solar energy while only slightly reducing summer solar energy. However, flat panels are a solid structure that will catch the wind if tilted up on the roof resulting in the potential to become a hazardous projectile in wind storms. Evacuated tubes have significantly less drag due to the spaces between the tubes that let the wind through. The ability to mount evacuated tubes on the roof at a steep angle is a major advantage as the solar system can provide heat year round.

3. The sun traverses the sky from east to west. The tubular design of evacuated tube collectors means that, so long as they are within 40 degrees of due south, they are always facing the sun and automatically absorbing maximum solar energy. Flat plate collectors absorb maximum solar energy only at solar noon. This factor is known as ‘incidence angle modification’ and should be adjusted for in estimating solar energy systems. Unfortunately Retscreen, a popular renewable energy estimating program, does not consider incident angle modification in its estimates.

4. Mathematical modeling considering panel area, tilt and orientation, along with collector efficiency parameters (optical energy conversion, heat-loss coefficient and incident angle adjustment) shows that evacuated tubes are more efficient in northern conditions. The models also show the benefits of high tilt angles, for example 65 degrees, compared to roof mount, for example 22.6 degrees on a 5:12 pitch roof. Under conditions in Calgary, Alberta a flat plate collector is expected to be about 55% efficient at converting solar energy to thermal energy and evacuated tubes about 75%. 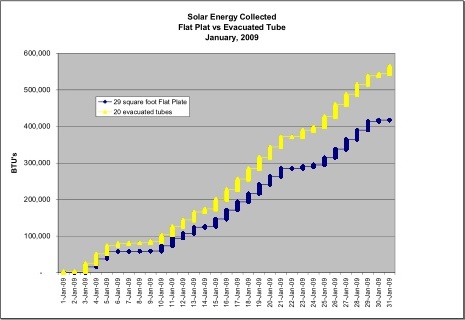 The test was repeated in July 2009 with another flat plate collector and a 30-tube evacuated tube collector. The larger 30-tube collector absorbed 1.5 million BTU’s which was 2.5 times as much energy as the flat plate at 600,000 BTU’s. 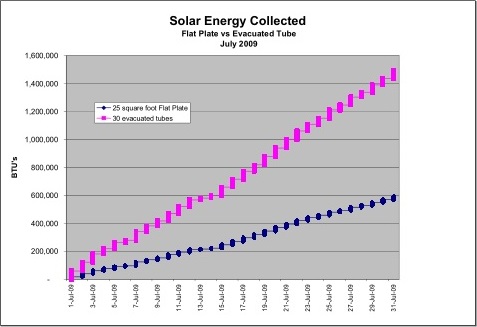 6. A Comparison of the modeling results to the actual field test results shows that the model over-estimated flat plate performance but is very close to evacuated tube performance.

7. Evacuated tubes weather the elements better than flat plates. Flat plate collectors can get covered in snow whereas snow that will sit on a flat plate falls right off a tube. Flat plates are also more susceptible to damage from hail. Evacuated tubes are rated to withstand a 1” diameter hail stone at 80 km/h. Hail larger than that will also break skylights and flat panel collectors. The hail risk is minimized because the cylindrical shape and tilt of the tubes deflects a majority of the hailstone's force. A Flat Plate collector lying flat on the roof provides a much larger target for a direct hit and very little opportunity for deflection to mitigate the impact. There are thousands of evacuated tubes in Alberta and no substantiated claims of hail damage. 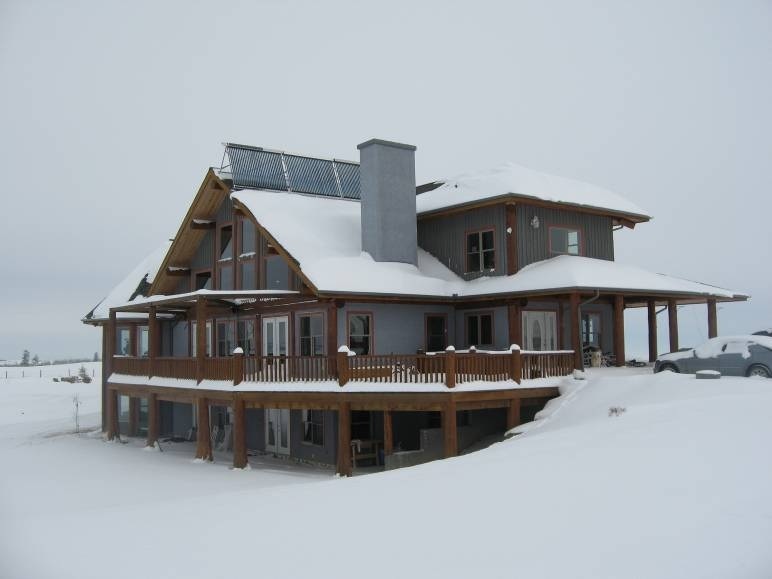